“A good Poet’s made as well as born”

Blank Verse is a webseries about William Shakespeare and the great writers of his time, re-imagined as modern day university students.  Inspired by Hollywood darling Chris Marlowe, Shakespeare comes to Bankside University to become a famous writer, but struggles to understand just what that means. Throughout the series he is constantly challenged by his best friend, the optimistic and wide-eyed Ben Jonson, to re-define his expectations and strive to be the greatest writer of this generation.

Featuring famous Elizabethan playwrights such as Chris Marlowe, Ben Jonson and Thomas Kyd, the series takes the historical events and context in which Shakespeare produced his famous works and throws them into the contemporary world. What would it be like if Shakespeare had not existed until now? How do we define greatness in our modern culture? Who is William Shakespeare?

Season one of this weekly webseries premiered on August 25, 2013 and aired every Sunday until December 29th. Full playlist of Season one can be found on the blankversetv youtube channel: Playlist .

Want to know more about the world of Blank Verse?

Check out our About us page. 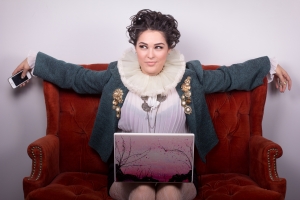 Ben Jonson’s Vlog is a stand alone spin-off from Blank Verse, featuring Benjamina Jonson. Picking up a few months after the events of Season 1, Ben’s Vlog will deal with Ben’s emotional state after the loss of her friend and find her on a journey of self discovery and creation. The vlog will run every Tuesday and Friday from March 25, 2014 – May 2, 2014 and will bring back some familiar faces from Blank Verse, as well as introduce us to new characters that will shape Ben’s Journey.